In December, we presented our annual look at digital engagement, with representatives of the organizations that took part in the Technology Forum at the 2018 North American Conference. Patrick Grégoire (Boréalis), Joseph Thornley (76engage), Anna Hauskins (Social Pinpoint) and Colin Ellis (Bang the Table) shared their views on hot-button topics like security and anonymity, and more complex issues like “trusting” online engagement when a decision involves many layers of stakeholders.

January – Diversity and Inclusion in P2

The January webinar brought together two IAP2 Core Values Award winners — both of whom won for “Respect for Diversity, Inclusion and Culture”.

In Surrey, British Columbia’s second-most-populous city, MODUS Planning, Design and Engagement and the City of Surrey worked together on a revamp of the Parks, Recreation and Culture Strategic Plan. Surrey’s demographic makeup consists of a broad range of ethnic, language and culture groups, including a large proportion of Indigenous Canadians and first- and second-generation Canadians. 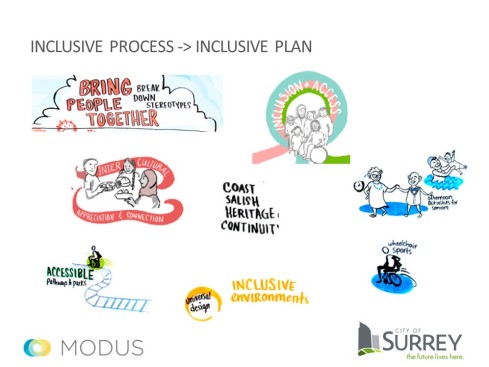 Past engagement efforts did not reflect the diversity of the community, and some felt the previous plan did not balance the full range of needs and interests so there was skepticism at the start about the new plan. The process involved reaching out to key community leaders early, to determine who needed to be engaged, and why and how, and using multilingual ambassadors to meet the people in their place. All forms of media spread the word and the City committed to reporting back often, so people were kept informed. This project also brought a change in thinking – and terminology. Rather than talk about the “hard-to-reach” people, Surrey and MODUS started referring to the “seldom-heard”.

Have you ever considered paying stakeholders and community organizations to take part in your P2 process? That was part of the strategy used when TriMet, the transportation authority serving the Portland, Oregon, region, developed its long-range bus expansion strategy.

While staff had conducted extensive interviews with people, it was felt that they were still missing input from historically underrepresented sectors. JLA Public Involvement was brought in to develop a more focused outreach strategy to reduce barriers to input and develop more inclusive engagement practices. In short, compensating community-based organizations (CBOs) for their time and effort in bringing people to the table lifted them from being participants to being partners, with a stake in the process.

IAP2 members can watch the webinar and learn more about the way these two projects became award-winners here.

This site uses Akismet to reduce spam. Learn how your comment data is processed.